Build innovation on the shoulders of giants. 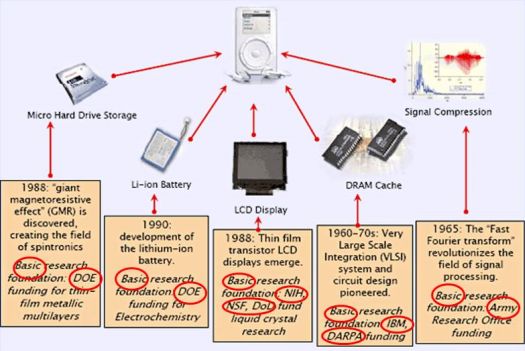 Build Innovation with code(love)—image from the Houston Chronicle.

If I have seen further it is by standing on the shoulders of giants. – Issac Newton

The basis of the PageRank algorithm, the billion-dollar plus bit of mathematics that powers much of Google’s business was developed at Stanford University in 1996 by Google co-founders Sergey Brin and Larry Page, but the roots of it came much earlier. Some have argued that it was Gabriel Pinski and Francis Narin who first formalized how to go about analyzing the quality of links—in 1976.

They were able to define a set of metrics for ranking the influence of science journals—which was very handy for a mathematical solution for how to rank the influence of individual websites.

Perhaps it is this that led Francis Narin to publish a paper where he noted that 73% of papers cited by US industry patents were based on public research.

The above photo is a highlight of how the iPod was built on public research.  It may be the ideal framework to build innovation.

The best models for creating new world-changing disruption may come from collaboration, and not competition.