For a long time, it has been a well-known fact that the rule of law in America applies separately for different groups. The old line goes something like this: steal one dollar, and you’re a thief. Steal a million, and you’re the king.

We saw this in 2008 where the only Goldman employee criminally prosecuted during that period was guilty for the sin of taking open-source code from Goldman he had worked on for documentation purposes—as opposed to trickery that cost America billions and perhaps even trillions in lost opportunity and jobs.

This has never been so blatantly obvious until now. In his latest revelations, Edward Snowden has claimed that the NSA spied on human rights groups in America, and used algorithms to tease out metadata from groups of individuals never suspected of plotting or doing actual terror attacks—individuals who were “guilty by association”.

This breaks so much of the spirit that governs the Constitution, but more importantly, it breaks so many laws that this assertion is breath-taking in of itself.

If these assertions are true, we are back to the days of the old, illegal, and covert COINTELPRO program, a FBI program that unscrupulously, and covertly monitored such radicals as Martin Luther King Jr. and Albert Einstein for advocating on civil rights.

Imagine a world where I could come under surveillance and special targeting for writing this piece, and you could as well by reading it.

This may be the world we live in now.

The NSA has opened Pandora’s box.

It is now the duty of those working for a free, fair, and open Internet to close it back up—no matter how hard that may be.

Telling the Truth to the NSA with code(love) 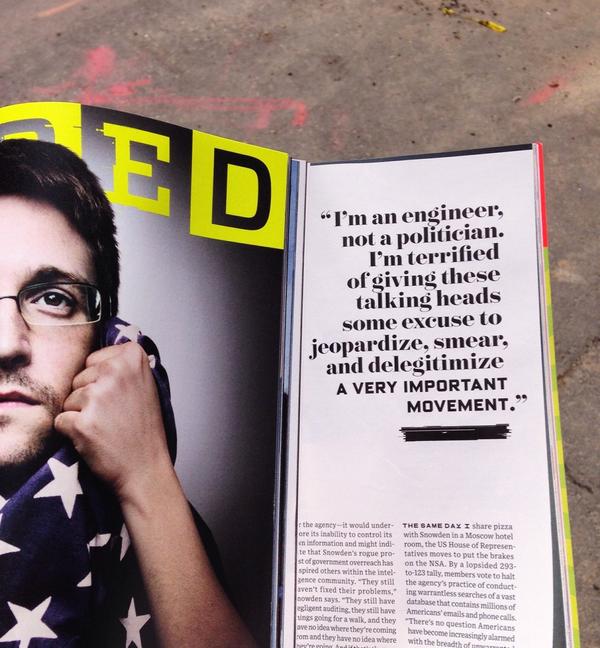 Why I really like the Snowden Wired cover picture.